As a longtime Houston bartender, Alan Barrera has poured and imbibed countless shots of alcohol.

Today the only shots this small-business owner will drink are wheatgrass ones made by his company, GrassOntheGo.

The company grew out of Barrera's own need to get healthy. After developing stomach problems so severe that he once had to stay in the hospital, a physician finally quizzed Barrera about his diet in 2009.

"No one had ever asked me about that before," Barrera, 34, said. "He wanted to know how many salads I ate a week. I told him the truth … which was none."

Shortly afterward, a girlfriend suggested Barrera try wheatgrass. People juice wheatgrass and drink it, like he did, or add it as a powder to drinks. 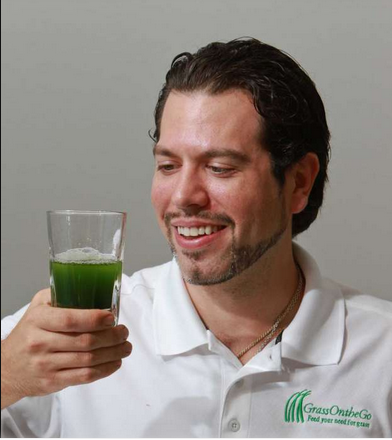 "At first I was reluctant," Barrera said. "But I'd done so many other shots in the past that I knew I could do this."

Within a few weeks, he was hooked on the juice. But he didn't believe it could actually heal health problems like people claimed, so he started doing research.

"I figured the claims were far-fetched," Barrera said. "But I found so many articles and videos with people's testimonials that I knew I was wrong."

By 2010, Barrera had a concept and a name for his company. He decided to flash-freeze wheatgrass in plastic containers the size of a shot glass. The process would allow people to keep the shots in their freezers for up to nine weeks.

Barrera purposefully named the company "GrassOntheGo" to get people talking about his product.

"Sometimes people think it's the other type of 'grass,' " he said, "but that perks up people's ears, and then we can explain what it really is."

Barrera said one of his first challenges was to improve the shots' taste. He began experimenting with ways to make the grass taste sweeter.

"Since I'd been a bartender, I knew how to mix things in drinks to make them sweet," Barrera said. "But I also wanted it to be 100 percent natural, to make the whole product natural."

In the end, he decided to add the grass's own roots to sweeten the shots. He bought his wheatgrass from a grower in Magnolia until deciding to grow it himself since he needed the roots.

Today GrassOntheGo grows its own wheatgrass in a warehouse in Bellaire. According to Barrera, it takes about 4 square inches of wheatgrass to make one shot. 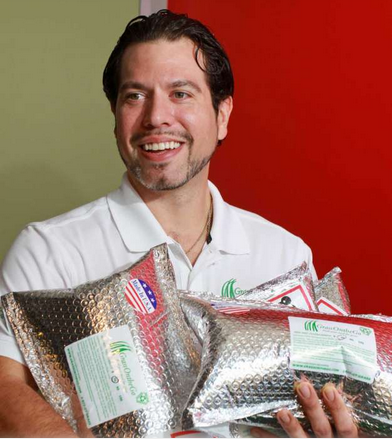 Initially, he sold the product at local farmers markets, including the Farmers Market at Imperial in Sugar Land.

"I've lived in this area for 11 years and never visited the farmers market before, but now I go every week for my wheatgrass fix," said Victoria Markowitz, of Sugar Land. "I work full time and have teenagers, so I should be tired, but I'm not now."

Today half of GrassOntheGo's sales are derived from farmers markets and the other half from its website. Barrera has invested some $50,000 of his own capital in the business, which has yet to turn a profit.

"It costs us about $1.50 now to make each shot, and that's what we sell it for," Barrera said. "But I know we can get the costs down. It's never been about the money, though. It's about taking the hassle out of wheatgrass so more people can try it."